Many years ago, one of my sons asked how a radio worked, and I suggested that the best way to answer his question was for us to build a crystal radio, as I had when I was about his age. As it turned out, it wasn't quite as easy as I had remembered, largely because some of the key components are much harder to find now. But, we found the parts, had a lot of fun and learned some things.
A couple of years after we built our first radio, we learned about a great organization, the X-tal Set Society. The Society has a web site, publishes books and a newsletter with lots of plans, and sells many of the hardest to find parts, as well as complete kits. If you are at all interested in crystal radios, be sure to visit the web site and buy some books and parts!
Here is some of what we learned and plans for the radio we came up with:


What does this have to do with proteins?

The truth is that many distinguished protein scientists have had very successful careers without knowing much about crystal radios! But, there is a bit of a connection. NMR spectroscopy, which is one of the most powerful modern tools for studying protein molecules, uses some of the same technology as radio communication. In fact, the circuitry of an NMR probe is almost identical to that of the tuning circuit for a radio, as described below.
Now, this may not be a sufficient motivation for you to learn about crystal radios, especially if you found this web site in the hopes of learning something about proteins. In this case you should probably take a look at some of our scientific publications.

The distinguishing feature of a crystal radio is that it requires no electric power: The sound is generated from the energy of the radio waves themselves, without any amplification. The audio signal is weak and is only powerful enough to drive earphones, but the sound can be wonderfully clear.
In the early years of the 20th century, crystal sets were the first radios in many homes. Even after radios with vacuum tubes (and then transistors) became widely available and relatively inexpensive, building a crystal radio was a very common introduction to electronics for many kids.

As suggested by the name, the key component is a crystal. Originally, the crystal was a mineral called galena. When a metal wire is brought into contact with galena, a rectifying junction is formed. That is, electricity flows through the connection with lower resistance in one direction than in the other direction. This provides a way of converting the high frequency AM radio signal into the much lower frequency audio signal that is then converted into sound in the earphones. Extracting the audio signal from the modulated radio signal is called "detection", and the crystal with the wire that touches it (called a "cat's whisker") is a "detector". The picture below shows a crystal detector I built, along with its modern equivalent, the diode. 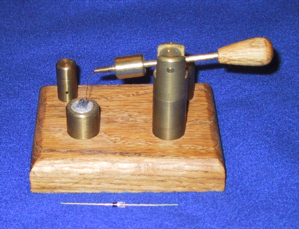 This is not an exact reproduction of an antique detector, but it is similar in style and serves the same functions of holding the crystal steady and allowing the cat's whisker to be carefully positioned. Not every position on the crystal will work, and it takes lots of patience to find a good spot and carefully adjust the cat's whisker for the best signal. Each crystal is different, and some work better than others. When radios were first installed on ships, each operator would often have his own favorite crystals that he would carry with him from one ship to another.
In the 1920's crystal detectors were largely replaced with vacuum tubes, which amplified the signal as well as detected it. During World War II, however, the crystal detector was brought back to prominence as a key component in the very high frequency circuits necessary for radar. Through a great deal of fundamental research in solid-state physics, methods were developed to reliably produce efficient detectors that did not require any of the fiddly adjustment of the original devices. Solid-state diodes became essential components of nearly all electronic devices, and most crystal sets are now built using readily available germanium diodes, like the one shown above. (A package of 10 can be bought at Radio Shack for about a dollar.) If, though, you would like to build a radio with a real crystal, galena crystals and wire for the cat's whisker can be purchased from the X-tal Set Society.
After World War II, the diode and the knowledge of solid state physics that was gained in developing it became the basis for the first transistors. Transistors, in turn, led to integrated circuits, and integrated circuits, of course, led to inexpensive computers and all of the other electronic marvels we now take for granted. The simple crystal detector is the direct ancestor of modern solid-state electronics.

The second major requirement for a radio receiver is a means of separating out signals with different frequencies, i.e. tuning in different stations. The simplest efficient circuit for this purpose consists of just a coil of wire and a capacitor connected in parallel, as shown below using the standard symbols for electronic components. 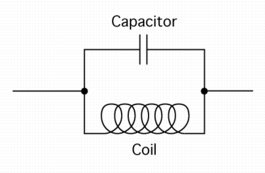 Typically, the coil for a crystal radio is formed by wrapping a single layer of enamel-coated copper wire over a cardboard or plastic tube a few inches long and an inch or two in diameter. The coil has a very important electronic property: Although direct current passes through it with low resistance, its resistance to a current that rapidly changes direction (an alternating current) increases as the frequency of the reversals increases. (The resistance to an alternating current is more properly called "impedance".) The impedance depends on the dimensions of the coil and the frequency of the current.
As indicated by its schematic symbol, a capacitor in its simplest form is composed of two metal plates separated by air or some other non-conducting material. This may seem like an odd arrangement for an electronic component, since it doesn't look as though electricity could pass through it. Indeed, direct current can't. But, an alternating current can. The impedance of a capacitor decreases as the frequency increases; exactly the opposite of the effect of a coil.
Now, think about what would happen if the circuit was connected to currents of different frequencies. At a very low frequency, the current will pass readily through the coil, but not the capacitor. At very high frequencies, the current passes through the capacitor but not the coil. For a given combination of coil and capacitor, there will be a magic frequency at which the impedance of the circuit is a maximum. At this frequency, electrical charge alternately builds up on the two plates of the capacitor and flows back and forth through the coil. The circuit is said to "resonate", just as a weight on a spring will resonate at a characteristic frequency.
In a radio, one side of the tuning circuit is connected to an antenna. For maximum efficiency, the other side of the circuit is connected to a metal rod or pipe buried in the ground. Radio waves are converted into alternating electrical currents in the antenna. Signals with frequencies that are higher or lower than the resonant frequency pass through the tuning circuit to the ground. (If the radio has a means of amplifying the weak signal from the antenna, as all modern radios do, the ground connection isn't necessary.) If, however, there is a signal that matches the resonant frequency, the energy of this signal can be drawn off to create the audio signal. In a simple crystal radio, the crystal detector and headphones are connected to the tuning circuit as shown below: 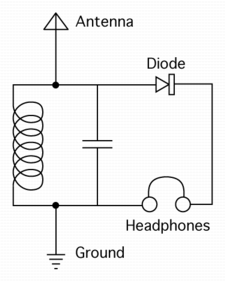 Detailed instructions for building a radio based on this circuit can be found below.
If the radio is to receive signals of more than one frequency, there has to be a means of adjusting either the coil or the capacitor. An adjustable coil can be made by scraping the enamel insulation off of the wire along a section of the coil running along its length and then arranging a slider that can be moved to contact the coil wire at different points. This is the method used in our radio, as shown in the picture below: 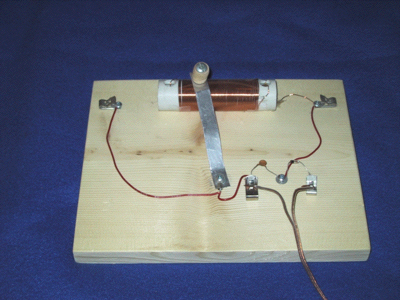 There are also adjustable capacitors. These usually have two sets of metal plates, one of which is mounted on a shaft that is turned to adjust the overlap between the two sets, as shown below: 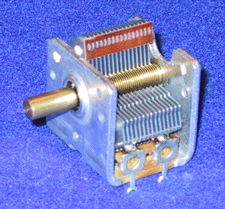 Capacitors suitable for AM radios aren't so easy to find anymore, but the X-tal Set Society has found someone to manufacture them, and they are available for a quite reasonable price. Using one of these, you can build a crystal radio without having to make a slider, or you can build a set with both components adjustable. The latter option makes it possible to cover a wider range of frequencies and can increase the sensitivity of the set.

The final critical component of a crystal set is a suitable earphone or pair of headphones. This isn't a easy as it might appear: The readily available headphones for portable radios, tape players, CD players, etc. won't work. At all. The reason is that these modern headphones are designed to be used with amplifiers and have a low impedance. A crystal set requires an earphone with a high impedance to match the other components of the circuit.
There are two major alternatives. The least expensive is a small earphone that uses a piezo-electric crystal to convert the electrical signal into sound. Most earphones in stores are not of this type, but crystal earphones can be found at some shops that sell electronic parts for hobbyists or ordered from the X-tal Set Society, as shown on the left in the picture below: 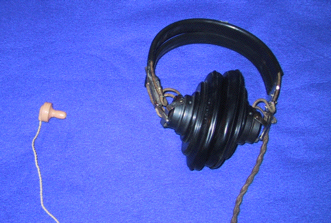 This type of earphone is found in most inexpensive crystal radio kits. Some seem to work better than others.
Better results can be obtained using a pair of high-impedance electromagnetic headphones, as shown on the right side of the figure above. These used to be quite common, but, like variable capacitors, are much less so now. But, you may be able to find a pair in someone's attic or at an Army-Navy Surplus store. I bought the pair shown above at a surplus store in San Diego. Suitable headphones will have a DC resistance, which you can measure with a simple Ohm meter, of about 2000 Ohms. With a good set of headphones, the sound from a crystal set can be plenty load and surprisingly clear.

Here are instructions for building the crystal radio shown above, in a pdf (Adobe Acrobat) file: Crystal Radio Instructions (pdf)
These instructions were included in a book entitled "Crystal Radio Projects" published by the X-tal Set Society. The book includes lots of other radio plans, most of which are more elaborate than this one.