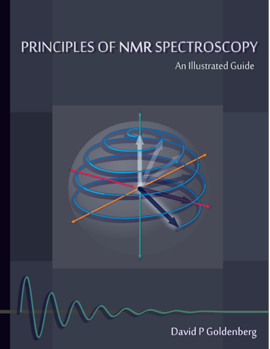 This book is intended to serve as either a textbook for graduate or advanced undergraduate classes or as a guide for independent study. A major goal has been to treat the subject in sufficient depth to allow a true understanding of modern solution NMR experiments, in a way that is accessible to a broad range of students and other readers. The book relies heavily on illustrations, including a novel style of vector diagrams used to represent the quantum correlations that arise between nuclei linked by scalar coupling (i.e. covalent bonds). This type of interaction lies at the heart of nearly all multi-dimensional NMR experiments, but represents one of the major challenges in learning and teaching NMR.

All of the Illustrations from Principles of NMR Spectroscopy are available to instructors adopting the book for their courses. The illustrations are provided as Adobe pdf files suitable for use in slide presentations. For more information, please contact .

Quantum mechanical calculations, for even simple spin systems, can very quickly become very complicated and error prone if carried out by hand. These calculations can be greatly facilitated by computer algebra system (CAS) programs, such as Maxima, Mathematica and Maple. Unlike most other mathematical software, these programs can manipulate algebraic symbols, as well as numbers. Both Mathematica and Maxima were used extensively in the preparation of Principles of NMR Spectroscopy, and a set of Maxima files are provided here for the use of students and others in carrying out calculations like those presented in the book.
Although the relative virtues of different CAS programs can be, and have been, discussed at length, Maxima has been chosen here because it is available as free open-source software in versions for the current major computer operating systems, Linux, OS X and Windows. There are even versions for Android and iOS (through the SAGE interface)! Although it lacks some of the polish found in the user interfaces of commercial products, Maxima is a very capable program and well suited for the type of calculations shown in the book. Maxima, and information about the program, can be obtained from:
http://maxima.sourceforge.net
In its basic form Maxima uses a simple command-line interface, in which commands are typed into a terminal window and results are output as simple text. Commands and results can also be read into the program and output as text files. Although functional, this kind of interface now feels rather old fashioned, and many users prefer a graphical interface with windows and menus controlled with a mouse. Fortunately, "front ends" with graphical interfaces to Maxima have been developed as open software. Of these, wxMaxima appears to be undergoing the most active development currently and has been used for this project. wxMaxima provides a workbook environment similar to those found in some commercial programs, if a bit more primitive. Versions of wxMaxima for Windows, OS X and Linux can be downloaded from the wxMaxima project page:
http://andrejv.github.io/wxmaxima
The files associated with this book are provided in a single compressed zip file:
PrincNMRspectr_maxima_March2016.zip
This zip file includes the following: Additional information can be found in the file readMe.pdf in the compressed zip file and in the gettingStarted.wxm workbook file.